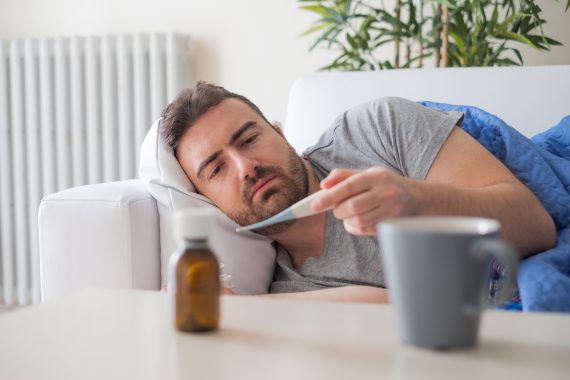 As we get used to living our lives during a global pandemic, we have to face the reality that, eventually, all of us will likely know someone who contracts COVID-19 (a lot of us do already).

I told you last week about losing a dear friend who most likely had the virus.

He was not someone I saw regularly, but any of us could be in contact right now with someone who’s infected.

This person may be living in your household or be part of your immediate social circle. And if that’s the case, there’s an important piece of information you need to know… how long is someone with COVID-19 contagious?

With the flu, people are contagious one day before they start feeling sick until five to seven days after their symptoms appear. But once their symptoms resolve, they don’t have to worry about spreading the virus to anyone else. Unfortunately, that doesn’t appear to be the case for COVID-19.

A recent study published in the American Journal of Respiratory and Critical Care Medicine found that people with COVID-19 may still be contagious up to eight days after their symptoms go away.

The study was small. It looked at 16 people with mild cases of COVID-19 who spent time in the Treatment Center of PLA General Hospital in Beijing.

Researchers found that on average, people were still shedding the virus two and a half days after they recovered. But this number varied quite a bit from person to person. Some people continued to shed the virus for eight days after any outward symptoms had resolved.

And this isn’t the only study that shows people who get COVID-19 may still be contagious after symptoms go away. This information also lines up with what we know about colds (as you’ve probably heard, some colds are caused by coronaviruses). Research shows that people carry cold viruses in their bodies for weeks after they feel better… which means they can spread it long after they feel better.

How to protect yourself and those around you

Now, the CDC currently recommends that people who have symptoms that are associated with COVID-19 isolate themselves for at least three days after their fever resolves. But based on this new research, that might not be enough.

A safer approach would be to self-isolate for an additional two weeks after symptoms go away… and that applies even if you just had mild symptoms. This virus is incredibly sneaky in that it’s mild (or completely unnoticeable) for some people and severe for others. Don’t let the mildness of your symptoms trick you into thinking you don’t need to take the same precautions to keep those around you safe.

This may sound extreme, but the only way to get this pandemic under control and return to normal life is by doing things that feel excessive. And that may include working harder to boost your immune system.

If you have this virus but aren’t showing symptoms, you can still give it to anyone around you… including the most vulnerable — as the research has confirmed.

So now is not the time to let your guard down. That’s why it’s important to understand that your immune system is like two sides of a coin.

Inflammation is your body’s natural reaction to infection and tissue damage. It protects you from foreign organisms such as viruses and bacteria. But on the other side — when left unchecked — it can attack your body.

In my years of research, I kept coming across certain modulators that seem to be perfectly suited to balance and improve the immune system’s inflammatory responses. I’d like to share them with you…

Black Cumin Seed Oil —This cold-pressed and hexane-free oil has been used for centuries and contains over 100 powerful components. It’s two most potent active ingredients are thymoquinone and thymohydroquinone — immune system modulators.

Turmeric Extract — This Indian herb (with a 4,000-year-old history of use!) helps modulate the Nuclear Factor-kappaB (NF-kb) switch. NF-kb is the master regulator that signals and turns your body’s inflammatory response on and off. Scientists have discovered the older you get the switch starts to go haywire — so support is important!

Vitamin D3 — Researchers have discovered when you boost your levels of Vitamin D3, inflammation is soothed and discomfort is better managed. Vitamin D3 deficiency is also linked to poor immunity.

Ginger Extract — The role the health of your gut plays on your overall health is becoming more commonly known. Gut inflammation can lead to everything from brain fog and immune problems to joint discomfort and muscle aches. This is attributed to “leaky gut” and leaky gut can trigger inflammation and other overactive immune responses

But not only do these natural helpers support a healthy inflammatory response for a balanced immune system, but they also help relieve pain that stems from inflammation too!

So, it makes perfect sense to me to include them in my daily health routine. Bullet-proofing your immune system may not be something you’ve thought much about in the past. But times are changing.