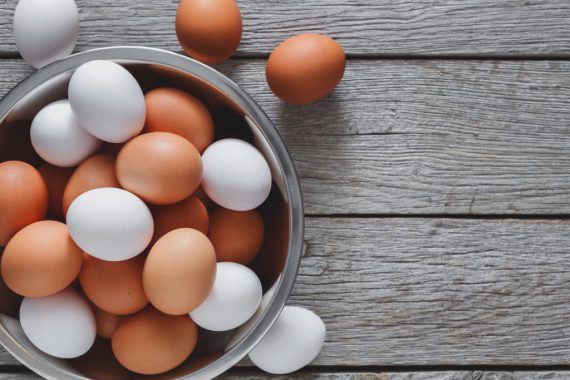 Whether or not eating eggs is good for your health has been a topic of debate for decades.

While some people have worried about the cholesterol they contain, others point to them as a great source of protein.

Me? I eat eggs despite my heart history.

But we need to remember that dietary cholesterol is only part of the puzzle. Most of the cholesterol floating inside our bloodstream is manufactured by the liver and can be influenced by stress, weight, exercise, genetics and what else you eat in addition to eggs.

And over the last few years, the research on eggs has gone back and forth. It’s enough to make your head spin.

And now, a new study is calling into question the safety of having your eggs and eating them too, especially when it comes to your heart.

Until 2015, eating less than 300 milligrams of dietary cholesterol per day from any sources was the guideline recommended in the U.S. But the most recent dietary guidelines omitted a daily limit when it came to cholesterol and included weekly egg consumption as part of a healthy diet.

They looked at pooled data on 29,615 U.S. racially and ethnically diverse adults from six different studies with up to 31 years of follow up.

And the news wasn’t good for egg lovers everywhere…

They discovered that adults who ate more eggs and dietary cholesterol had a significantly higher risk of cardiovascular disease and death from any cause.

According to the researchers, the difference was the fact that those studies generally had a less diverse sample, a shorter follow-up time and a limited ability to adjust for other parts of the diet.

When asked whether this means you should give up your morning omelet, study author Norrina Allen, associate professor of preventive medicine at Northwestern University Feinberg School of Medicine said, “The take-home message is really about cholesterol, which happens to be high in eggs and specifically yolks. As part of a healthy diet, people need to consume lower amounts of cholesterol. People who consume less cholesterol have a lower risk of heart disease.”

If dietary cholesterol is a concern, you’ve got to examine all the food sources in your daily diet, including meat and dairy products.

Put simply, have your eggs, simply eat them and any other high-cholesterol foods in moderation. It’s important to remember that beside protein eggs contain essential amino acids, iron and choline.

I’ll continue to eat my eggs for their protein and near perfect nutrition and look to cut cholesterol elsewhere — such as avoiding the bacon and burgers. As well as load up on nutritious cholesterol lowering foods such as apples, oranges, grapes and oats to name a few.