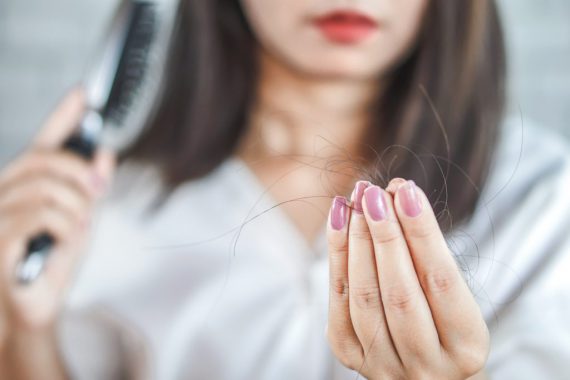 Ask any 10 men what they fear most as they age and one of the top answers will be losing their hair.

In fact, I see it with my husband who, on a regular basis, asks me if his hair looks as thick as it used to or if I think he’s starting to go bald. And he’s not alone. It’s estimated that by the age of 50 a whopping 85 percent of men will experience hair thinning.

And I can attest myself: women experience our own share of hair loss, and it’s just as hard, if not harder, on us.

So, is it any wonder that the hair loss treatment industry now boasts a market value of $3.9 billion?

Now though, thanks to new technology, that market may come to a screeching halt and people everywhere could exchange their worry of thinning hair for thicker, fuller tresses…

As easy as putting on a hat?

Engineers at the University of Wisconsin-Madison have come up with a completely non-invasive, low-cost hair-growth stimulating technology that is as easy as slipping on a hat — because in essence, it is one.

The device is based on similar technologies that gather energy from your body’s day-to-day motion. So, basically as you walk around, move to reach for your cup of coffee, go out to get the mail or take those stairs at work, you power it up.

Then, it stimulates the skin of your scalp with gentle, low-frequency electric pulses, which coax your dormant hair follicles into reactivating hair production. Put simply, it wakes them up.

And, since you power it with your movement, there’s no bulky battery pack needed. You just wear them underneath the crown of your everyday baseball cap.

In testing on hairless mice, the researchers found that the electronic option was just as effective as two different compounds found in baldness medicines.

Even better, because the electric pulses from the device are incredibly gentle and don’t penetrate any deeper than the very outermost layers of your scalp, trials show that they don’t come with any side effects.

So when it finally comes to market, it will already have a big advantage over traditional prescription baldness treatments you’d get from your doctor, like Propecia, which can cause everything from depression and anxiety to sexual dysfunction.

Besides the fact that no one’s quite sure how long it will be till the “hair growing cap” is available to the public, there is unfortunately, still one small catch…

If you’re just starting to lose your hair and experience thinning, the researchers say, this is definitely going to be your best option.

However, because the device doesn’t cause brand-new hair follicles to sprout from smooth skin, only reactivates existing ones, this won’t work for a man who has already been as bald as a billiard ball for a few years.

In the meantime, there are a few low-cost, low-tech (and side effect-free) ways you can fight hair loss right now:

Massage — Massage has been shown to stimulate your scalp so your hair can grow in thicker and healthier. In fact, studies have found it to be just as effective at stimulating new hair growth as the prescription option, minoxidil. Just add rosemary oil to a carrier oil (like coconut oil) and massage it into your scalp.

Take omega 3 plus antioxidants — Try taking a fish oil supplement along with potent antioxidants. In a hair loss study on women, supplementing antioxidants plus omega-3s and 6s was shown to enhance both hair density and diameter so that hair looked fuller and thicker. This was not only confirmed visually but by scientific measurements, and 89 percent of the participants reported less hair loss after six months. Now most people don’t need to supplement omega 6 because it’s plentiful in an American diet, as long as you’re eating meat, poultry, fish and eggs. But the omega-3s and antioxidants are always great to get more of.

Here’s to the wind in your hair!