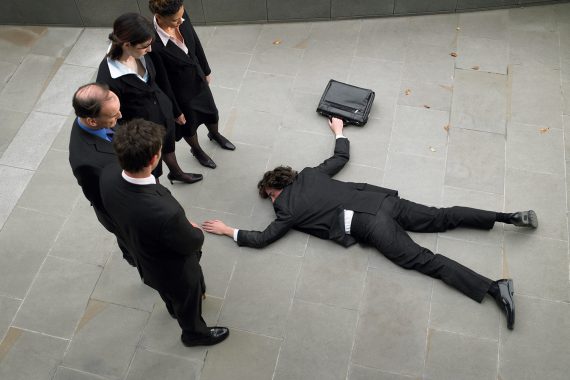 I read some alarming information recently that reminded me of a boy my daughter was friends with in elementary school. They’ve lost touch over the years, as kids often do, but his family is always in my thoughts.

When I met his family, James was in first grade. He had a younger brother who had not started school yet. The family had just moved to South Florida from New York City after James’ father passed away unexpectedly… he was barely 40.

As his mother and I sat in our backyard one afternoon while the kids played, she told me the story…

They were a young couple living in the city with a toddler… and she was nearly 9 months pregnant with their second. It was a morning just like any other. They got up, ate breakfast, her husband got dressed and headed out the door to grab a cab to work…

…after he left, she was cleaning up the kitchen when she heard an ambulance in front of their apartment building. I’m sure you can imagine where I’m going with this…

After having a massive stroke, her husband was dead on the sidewalk right outside their home. There was nothing the paramedics could do.

I was so shocked and sad for her because people in their early 40s aren’t supposed to have strokes!

She went on to deliver her baby not too long after… and obviously her youngest son never got the opportunity to even meet his father. After a few years of living as a single mother of two young kids in New York City, she decided she needed a gentler pace of life and moved to Florida to be closer to her parents.

Sadly, these aren’t the only people I know who’ve lost a loved one in the prime of life to a stroke…

That’s because stroke risk for those under 55 is rising… even as strokes and risk of death from stroke for older people is declining in the developed world.

So what exactly is contributing to the higher stroke risk for younger adults?

After analyzing the research, the Centers for Disease Control (CDC) attributed it to risk factors like obesity, high cholesterol and high blood pressure — conditions usually associated with older adults… and ones that can be modified.

Studies are currently being conducted to determine if risk factors like diabetes and hypertension are causing an increase in strokes in adults in their 30s and 40s… or if better diagnosis of stroke in younger adults is causing the higher numbers.

But one thing seems certain, diet and lifestyle are contributing factors, and that means more attention to both needs to start at a younger age.

An ischemic stroke is the most common form of stroke and happens when a blockage stops the supply of blood to the brain… unlike the less common hemorrhagic stroke that is caused by a burst blood vessel in the brain.

According to recently released information, even only mildly symtomatic versions of COVID-19 may be causing strokes in adults in their 30s and 40s.

When I read this I knew I needed to warn you immediately. That’s because…

Younger people are typically unwilling to call 9-1-1. Especially considering the prevalent news about overwhelmed hospitals. And younger people are far less likely to be on the blood-thinning drugs that are so common for older cardiovascular patients.

As well, stroke is not exactly on the health radar of younger adults… but it clearly should be as I’ve explained.

Evidence is preliminary (but growing) that “the COVID” causes blood to clot in unexpected ways… and stroke is a consequence.

While a younger person may be able to recover faster from a stroke, they face greater short term danger. That means time is of the essence! Because the human brain shrinks as we age, younger people have less room in their skull to accommodate the brain swelling that happens with stroke.

To save young patients, doctors need to remove part of the skull for an extended period of time to accommodate the swelling. But once recovery starts, the brain will bypass the damage and retrain new areas adjacent to the injured tissue.

As we go through this uncertain phase of life, keep the acronym “FAST” in mind to help identify a stroke:

The best way to a healthy heart and normal blood flow is maintaining a healthy weight through a diet of fresh, unpackaged foods including lots of fruits and vegetables, getting some exercise everyday and avoiding high risk-activities like smoking.

But what if, like me, you have a higher cardiovascular risk factor?

The first and most obvious that I’d recommend is Nattokinase.

Discovered in 1980 by Dr. Hiyosuki Sumi, Nattokinase comes from a traditional Japanese dish called natto. Natto is a fermented soybean mixture with a cheesy consistency and a strong odor. Its health benefits date back thousands of years, and it’s a staple of Japanese culture.

Little did Dr. Sumi know that his lunch would turn into an incredible discovery for circulatory health. While doing research for the Japan Ministry of Education on natural agents to support healthy blood clotting, Dr. Sumi looked down at his natto lunch and thought “what the heck.”

He dropped a piece of natto into a petri dish containing a blood clot and to his amazement it worked! After further research, it was determined that an enzyme in natto works to thin fibrin, the mesh-like composition of materials the body produces to clot blood so we don’t bleed to death.

By about age 40, people don’t produce enough of the agent needed to combat an excess of fibrin, which is called plasmin. Turns out the enzyme in natto was almost identical to plasmin. Because it supports healthy blood clotting, natto has the ability to keep blood flowing smoothly naturally!

Numerous published studies confirm Dr. Sumi’s discovery. And since he discovered it, he got to name it… thus Nattokinase came to be.

You should also consider an artery-supporting nutrient called Vitamin K2… not to be confused with the Vitamin K found in green, leafy vegetables. Vitamin K2 is a key nutrient that helps support healthy calcium utilization.

Put simply, vitamin K2 helps reroute calcium — which would otherwise end up blocking arteries and thickening blood — to the bones, where it can be of actual benefit.

There are many subtypes of Vitamin K2, so it’s important when choosing K2 for artery support and heart health that you look for subtype MK-7. It’s Vitamin K2 as MK-7 you need for healthy blood vessels.

And last but certainly not least is the super-nutrient CoQ10!

CoQ10 is the critical spark that creates life and energy in every cell in your body — especially your heart cells. And unfortunately, many people are deficient because many common medications used to lower cholesterol, reduce blood pressure and control depression deplete the body of CoQ10.

To understand CoQ10’s important role in the body we need to watch young children at play.

All that energy to run and play is fueled by CoQ10. But CoQ10 begins dropping around age 20 and keeps dropping thereafter. By the time you reach your 40s, 50s and 60s, your levels have dropped significantly.

Decreased energy is a good indicator that your level of CoQ10 is low. And low levels of CoQ10 leave you open to all the types of health problems we’ve discussed today… and more.