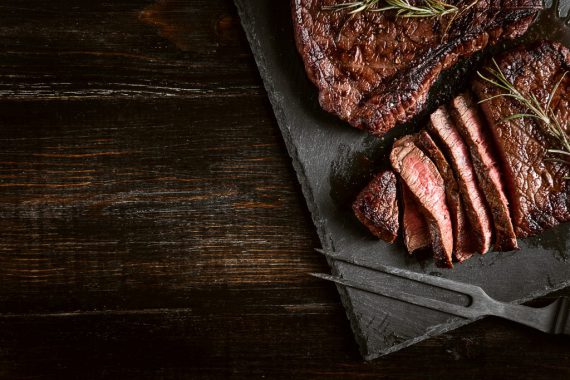 I have a friend who is an ardent vegetarian.

We’ve been friends for quite a while, so she is aware of how health conscious I try to be and of my family history with heart problems.

It really annoys her that I still eat small amounts of red meat.

To add credibility to my argument that it’s OK to eat red meat in moderation, I remind her that in the American Heart Association advises to limit red meat, not cut it out completely.

Boy, have I been wrong.

The results of two new studies show that my friend may be right, and if I don’t want to clog up my arteries, I’ve got to get serious about red meat.

The problem with red meat is something known as trimethylamine N-oxide or TMAO.

It’s a chemical known both for increasing the amount of cholesterol deposits in walls of arteries (think atherosclerosis) and for increasing blood’s normal clotting responses — and the risk of heart attack and stroke that comes with these things.

In the first study, researchers at the Cleveland Clinic looked at the effects of different types of protein on heart disease markers in healthy men and women. The participants ate either protein from red meat, white meat or non-meat sources.

And here’s the kicker…

After one month on their diet, the red meat eaters had three times the amount of a TMAO in their blood as the other two groups.

But there was good news…

The team found that those increases in TMAO were reversible. After a month skipping the red meat, the participant’s levels of the chemical decreased significantly.

The second study looked at the risk of death from both heart disease and all other causes linked to red meat consumption.

Loma Linda University Health researchers studied the diets and risk of death in approximately 7,900 Seventh-day Adventist men and women over a period of 11 years.

Adventists are a unique population — approximately 50 percent are vegetarians. Those who consume meat do so at low levels.

When all information was gathered from this group, they found that eating even a small amount of red or processed meats per day (just 2 ounces or less) was associated with higher risks of death from heart disease and even increased the risk of all-cause mortality (death for any reason).

“Our findings give additional weight to the evidence already suggesting that eating red and processed meat may negatively impact health and life span,” said Michael Orlich, M.D., Ph.D., co-director of the Adventist Health Study-2 and co-author of the study.

Changes you can make for a healthier heart

Red meat’s negative effects on heart health is nothing new. But it is concerning to learn that regular red meat consumption, even at low levels, significantly increases these risks.

That’s why Harvard Health recommends trying a Mediterranean approach instead. A Mediterranean diet focuses on fresh fruits and vegetables along with legumes, nuts and whole grains, fish, eggs, and poultry as well as small servings of cheese and yogurt.

What if you’ve been eating an over-abundance of red meat your whole life? Well, as the first study found, once you cut out the red meat, the level of that cholesterol-increasing chemical, TMAO, can drop significantly.

With my family history (and the fact that up until now, I’ve enjoyed steak, moderately) I go a step further…

Plaque is made up of fatty substances, cellular waste, fibrin and cholesterol. And when it begins to build up, it catches and holds on to rogue calcium — and that makes a gob-stopper.

Here’s the thing about calcium: Researchers at the Intermountain Medical Center Heart Institute in Salt Lake City found that if calcium is present in your plaque it’s the best indicator of existing disease.

The jury is in and red meat is out if you want to avoid heart disease. So, ditch the steak and go for heart healthy sources of protein instead. It may seem difficult at first, but your heart is worth it.