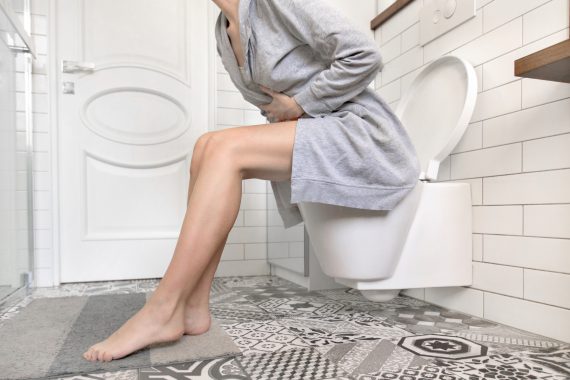 Most of us have experienced a “disruption of the gut” at one time or another and know just how uncomfortable, or even downright painful, it can be.

In fact, when business as usual stops down there, real problems start.

That’s why it’s so important to keep your gut in rhythm — and by that, I mean going through the normal motions of contracting and relaxing, so things keep moving along, the way they’re meant to.

However, that can be easier said than done. Far too many factors can cause a kink that keeps the food you eat from moving through your system efficiently — including illness, irritable bowels, problems with diet or simply too much stress.

Last summer I had a stressful experience that bought my gut to a screeching halt.

My dog got sick and starting vomiting… and of course it was a weekend and late at night. I had to rush to the emergency vet, worried the whole way that he’d gotten into something possibly poisonous and we might lose him.

Turns out he had a case of garbage gut because he’d gotten into something a neighbor had thrown out. All in all, it was a minor event for him, but a major ordeal for me. It took weeks for my bowels to get back to normal and for the sharp pains to subside.

But that was the last time I had that problem. I’ll tell you how I fixed it — but first, here’s why it happens…

Microorganisms and your gut’s nerve cells

Thanks to researchers at the renowned Francis Crick Institute, you can leverage a simple, healthy, proven path to keep your gut working the way it’s supposed to… even when life happens.

Over the last decade there’s been tons of research on the gut microbiome and the far-reaching effect it has on the human body.

Science has revealed that the gut works like a second brain and is considered headquarters for the immune system. Now that’s a big responsibility for all the teeny tiny gut bugs that make up a microbiome.

But oddly enough, according to Vassilis Pachnis, a research author with the Francis Crick Institute, “There’s less understanding about the role they play in maintaining the healthy functioning of the millions of nerve cells within the digestive system itself.”

So he and fellow researchers set out to identify how trillions of microorganisms that live in the gut impact one of its most important day-to-day functions — the process known as peristalsis, which is the involuntary constriction and relaxation of the muscles of the intestine.

And here’s what they found…

The team discovered that when you have plenty of these good microbes present in your gut, a specific gene called AhR is activated in your intestinal nerves. This allows your intestines to experience the wave-like movements during peristalsis that pushes the contents forward (and eventually out).

However, if those beneficial microbes aren’t present, AhR activation comes to a screeching halt, stopping peristalsis and everything that goes along with it.

When asked to sum up the results of the study, Yuuki Obata, lead author and postdoc in the Development and Homeostasis of the Nervous System Laboratory at the Crick, had this to say, “There is a clear link between the presence of microbes in the colon and the speed at which food moves through the system. If this relationship goes off-kilter it could cause considerable harm.”

When waste doesn’t move along and exit, constipation can be the least of your problems. The longer that stuff sits in your gut walls, the longer toxins build up that can permeate the walls of your colon and lead to sickness, leaky bowel syndrome and even cancer.

Populating your gut with the best workers

In other words, if you want to keep your gut operating smoothly, you have to keep your intestines populated with the microbes necessary to do the job.

That’s a lot easier on your gut than resorting to stimulant laxatives that force painful contractions to empty your intestines — and a lot safer too.

When people turn to these laxatives over and over again, the gut becomes “addicted.” The natural contractions begin working less and less and the body becomes dependent on drugs to do the work.

So what are these microbes the Crick scientists identified as the catalyst for the AhR gene?

Something you’ve heard about plenty from me — yep, probiotics.

It’s not new news that your gut needs probiotics to stay in good shape, but now we know they are actually the worker “bugs” that keep everything in working order. They are the key to peristalsis and keep you from having stomach discomfort.

And they’re easy to include in your daily diet.

Great sources of probiotics include:

Or you can simplify things even further and simply take a daily supplement that delivers all of the probiotics your body needs to keep things moving.