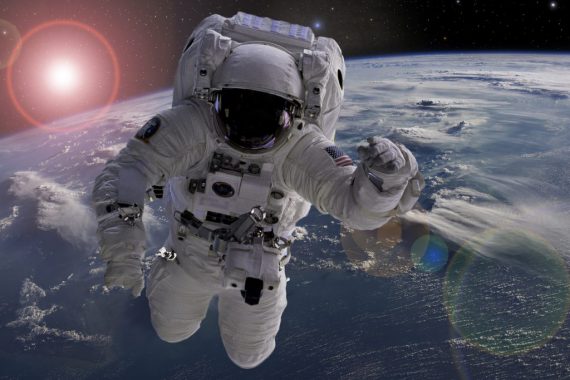 What do astronauts, you and I have in common?

A loss of muscle strength.

Sarcopenia, the cause of muscle loss that most of us earthbound misfits experience, is a natural occurrence that starts as early as your 30s and kicks in to high gear in your 50s and 60s.

For astronauts, though, it’s accelerated when they’re exposed to zero gravity conditions for weeks, if not months at a time.

That’s a big problem, especially as NASA looks forward to manned Mars missions that could keep astronauts in space even longer.

That’s why some of the best researchers at Harvard are involved in helping them solve this dilemma.

And luckily, for average Joes like you and me, this research has put the spotlight on a simple antioxidant available to anyone — whether you have a first-class ticket to Mars or not — who doesn’t want to lose muscle strength with age!

After too much time without exposure to gravity, astronauts can end up with weak bones and muscles, heart problems and even reduced insulin sensitivity.

That’s why the International Space Station (ISS) and spaceships come with state-of-the-art exercise equipment to try to make up for the lack of gravity.

The problem is that, although exercise helps, it’s not enough to combat the lack of force.

So even though smaller and all-in-one-type exercise devices are in development, NASA knew they had to do something else to support their astronauts…

And unlike so many in the medical community, they had the foresight to look to nature and diet for an answer…

Lead study author Marie Mortreux of Beth Israel Deaconess Medical Center, Harvard Medical School, felt that dietary strategies “could be key, especially since astronauts traveling to Mars won’t have access to the type of exercise machines deployed on the ISS.”

And resveratrol, the compound found in the skin of grapes (and red wine) was what she had in mind. That’s because she knew previous research had demonstrated that resveratrol had osteoprotective effects and appeared to mimic the effects of physical exercise in wasting disorders. So, she and her team set to work using mice to see if these benefits would extend to a “Martian” environment.

Rats in the Mars-like environment who did not receive resveratrol rapidly lost grip strength and volume of slow twitch muscle fiber. They even experienced decreased calf circumference and muscle weight.

On the other hand, the resveratrol group not only maintained their grip strength, it was exactly the same as in the rats who were kept under normal gravity conditions. And to top it off, they maintained more muscle mass and lost less muscle fiber.

Dr. Mortreaux mentioned a special reason that resveratrol may have been the perfect answer to combating muscle loss in space: “Resveratrol treatment promotes muscle growth in diabetic or unloaded animals by increasing insulin sensitivity and glucose uptake in the muscle fibers. This is relevant for astronauts, who are known to develop reduced insulin sensitivity during spaceflight.”

Resveratrol and your muscle strength

If resveratrol has the power to save astronauts from muscle loss in space, can you imagine what it can do for you here on Earth?

After all, you still have gravity working for you — but you’ve got that dreaded sarcopenia working against you.

In my opinion, there are already so many great reasons to support your health with resveratrol, and this research only adds to that — so why not?

It’s so easy too… you’ll find it in numerous dietary sources like grapes, blueberries, red wine, cranberries and even peanuts.