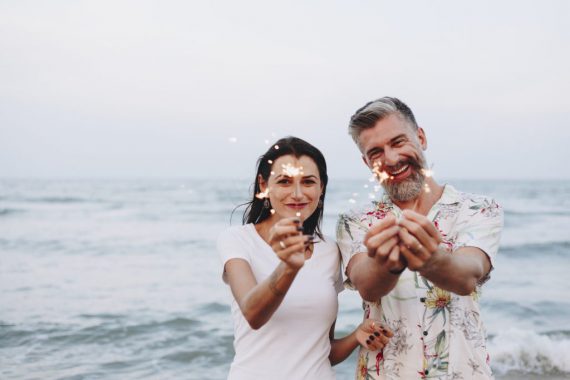 Plastics are now used to make just about everything. Microscopic pieces of plastic make up the clothes we wear and the bottles our water comes in. They’re even in the food we eat.

That’s because in addition to the fact that companies intentionally use microplastics for manufacturing a never-ending list of items — including the packaging that contains our foods — plastic trash that’s been dumped into the ocean has become a ready source of food for sea life, carrying contamination up the food chain.

Now, brand new research that looked at the results of 26 separate studies shows that we’re not just becoming a plastic nation, but plastic people…

A side of plastic with your dinner?

The research, reported in the journal Environmental Science and Technology, analyzed the amount of microscopic plastic particles Americans are exposed to on a daily basis from just eight sources, including:

They then assessed approximately how much of the foods on the list we eat based on the recommended dietary intakes for each.

This led to a frightening conclusion.

If you drink bottled water, the number is even higher. In fact, getting your water from a bottle instead of the tap raises your plastic consumption by a whopping 90,000 microparticles annually!

What’s worse is that the researchers say that as bad as these numbers sound, they’re likely significant underestimates since they only considered 15 percent of Americans’ caloric intake, meaning you’re likely getting far higher levels of those plastics.

How much? Well a study called ‘Assessing Plastic Ingestion from Nature to People’ reports that people consume 2,000 tiny pieces of plastic each week, on average, which is the equivalent of eating a teaspoon of plastic — or a credit card — every week.

The health effects of this microplastics consumption is unknown… you can’t exactly do a study where you ask people to eat a bunch of plastic and then see what diseases they end up with.

However, they also say that some of these particles are certainly small enough to enter human tissues, where they could trigger autoimmune reactions or release toxic substances. No wonder autoimmune disorders are on the rise!

And when you consider that we do know what plastics are made from and the dangers their building blocks hold, it’s pretty clear that consuming all of those microparticles every year can’t be healthy.

Take just one of the building blocks of plastics, BPA, for example.

A review of 91 studies found that exposure to BPA is associated with metabolic disease, developmental disorders and other health problems. To top it off, it’s a known endocrine disruptor.

And it’s only one of the potentially toxic chemicals lurking in those plastic microparticles we’re all consuming.

How to skip the plastic

With plastic particles all around us, even in the air we breathe, there’s no way to eliminate them from our bodies completely. But there are certain things you can do to lower your risk of plastic consumption:

• Skip the bottled water — Instead of bottled water, use a quality water filter and get your drinking water from the faucet.

• Be beer savvy — Since alcohol, including beer, is often riddled with microplastics, look for brands that are made using filtered water.

It’s also important to support the organ responsible for clearing out any toxic chemicals in your body — your liver.

Milk thistle has been found to help support the elimination of heavy metal buildup, medication residue, environmental pollutants and alcohol.

Resveratrol, the antioxidant resveratrol is found in the skin of grapes and a few other berries, is ultra-protective of the body’s cells.

EDTA chelation, in particular, has been used since the 1930s to help treat people exposed to lead, mercury, aluminum and cadmium. It’s a simple amino acid, similar in composition to vinegar, that helps flush out unwanted substances.

Microplastics are everywhere. It’s up to you to take the steps necessary to protect yourself. Eliminate as many sources of the potential toxins from your life as possible, support your body’s detox organ and give it a helping hand to keep things pollutant-free.

How tiny toxic plastic particles are ending up in your food

Microplastics found in water, food and air the equivalent of eating a “credit card a week”

Bisphenol A and human health: A review of the literature

Bisphenol A: an endocrine disruptor with widespread exposure and multiple effects.